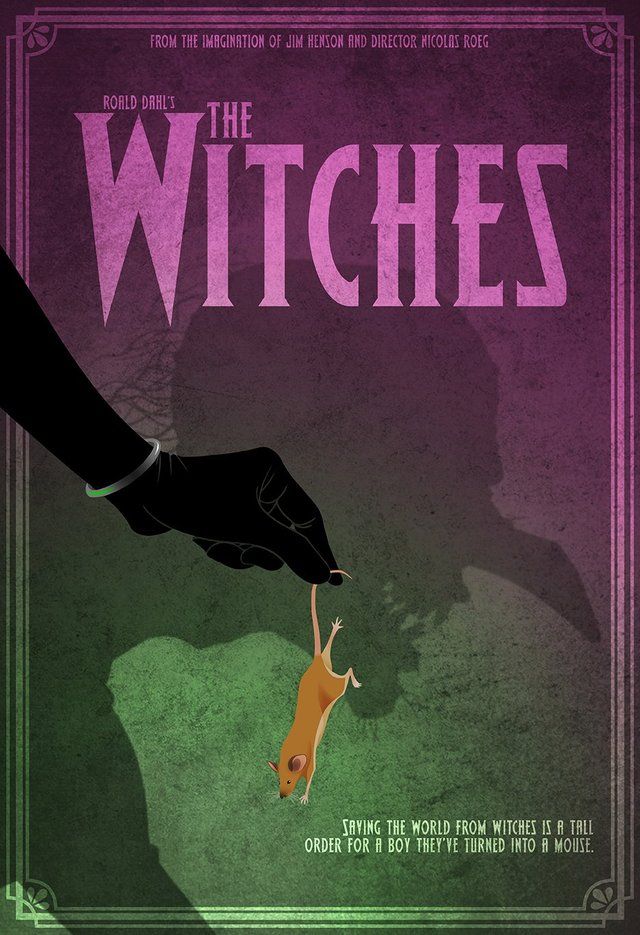 Writers: Allan Scott (Screenplay) Roald Dahl (Based on book by)

From a young age, Luke (Jasen Fisher) is told about witches, horrid beings posing as women with claw-like hands, no toes and bald scalps covered with wigs. His grandmother Helga (May Zetterling) wise to inform him about these creatures as it isn't long until young Luke has an encounter for himself. To make matters worse, Helga gets ill, and the police inform them of Luke's parents being involved in a fatal car collision.

Due to both illness and the recent tragic news, they book a room in a luxury hotel for some respite. However unbeknownst to them the hotel also rented out its conference room to a coven of witches under the cover of "The Royal Society for the Prevention of Cruelty to Children" and their Grand High Witch Miss Eva Ernst (Anjelica Huston) has concocted a nasty new formula to turn children into mice.

Based upon Roald Dahl's book, The Witches can be seen as a darker type of children's movie, perhaps best shown to a child that is a bit older due to the thematic eeriness throughout, mainly lead by Mai Zetterling's portrayal of grandma Helga, who is by far the most dramatic storyteller in the whole film. She sets up the witches as truly terrifying murderesses preying on innocent children.

Soon after the grandmother's explanation of the folklore, witches start appearing in droves and not long after they get unveiled for the horrifying monsters they are. Even watching The Witches three decennia after it's original release, the makeup and prosthetics are still effectively revolting. It's not difficult to see why Anjelica Huston frightened many children with her foreign-sounding accent and experience with more ominous roles such as Morticia Addams in The Addams Family. While the conference room scene is perhaps one of the most recognisable for those that have seen this film adaptation, some age does show mainly due to the evil witch mask where Huston's entire figure seems to change from an authoritative and classy woman to something that appears to just crawled out of an attic somewhere, her tone and sleek figure change entirely.

During this conference room scene, Bruno (Charlie Potter), another child within the movie appears. The rather gluttonous boy has been promised chocolate by Miss Ernst yet instead he serves as her guinea pig showing all the other witches of how successful the formula is. With both the transformation of Bruno into a mouse and Miss Ernst into the natural form of a witch the adventure portion of The Witches begins, the mice are effectively done by Jim Henson's creature shop switching between fast-moving mice on wires and more animated puppets that appear to be talking and moving to the actors within the film. While expertly done something just seemed off, it is hard to pinpoint, but the biggest issue was a factor for both the Grand High Witch and the transformed children, and that is the audio not being lined up correctly. Reactions seemed slightly off, slow, and the dialogue didn't seem to fit the film's characters anymore, along with the voices sounding different than they did before. It might be ageing of the film though, and I cannot critique it too much, same goes for most of the CGI and effects, even though the transformation into mice was quite well done for the time.

The Witches hangs in a fragile balance between horror, adventure and comedy some of which are clearly defined with roles like grandmother Helga's frightening tales, the hotel manager's frantic demeanour and the children's journey through the hotel. There's certainly something entertaining for both parents and children alike in The Witches which ends with what seems like a hint to a possible sequel that never came to fruition.

Effectively a children's horror, but missing that little extra pizzazz.