In this small blog, I’ll be looking at two shorts made by Michael Wong, a Malaysian director currently residing in Beijing, China. These projects have been making rounds on the independent film circuit with positive reception. While usually, my attention goes to feature films, it has been an enticing detour into something different and possibly a jumpstart into different experiences and some sort of Mini-Review blog format.

The Story of 90 Coins: www.vimeo.com/michaelwong/thestoryof90coins/

With a simple gesture, the intention of love is made by a man infatuated with an aspiring fashion designer. Every day for ninety days giving the reluctant girl a coin proving to her his devotion

Written by Jackie Bai and directed by Michael Wong, this is their first collaborative project published. 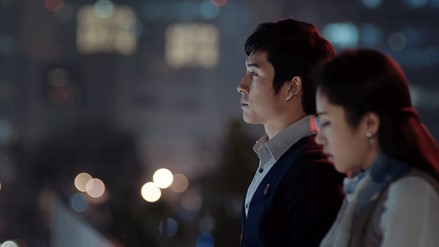 It’s a simple yet enticing tale that lasts just long enough to transfer a heartfelt message while playing with the emotions.

Utterly different from Wong’s eventual second project, ‘’The Tattooist’’, ‘’The Story of Two Coins’’ is as light and endearing as it is sombre. As a virtuous and patient man tries to win the heart of a shy fashion designer, things go from charming to frustrating as the benevolent charms become nothing but a memory.

There are certainly some good aspects to this short, but it doesn’t seem very different in cinematic style compared to other Chinese romance genre-work, despite being highly polished in quality. Segments of narrated dialogue work more dis-engaging than fulfilling, but the dramatic tones rescue it in the end as jealousy and unsureness take their hold.

If anything, this is a simple tale and can be appreciated on a dreary day. The depth tucked away in the cinematography shows promise from young director Wong and his writing partner Bai.

In the backrooms of an acclaimed tattoo artist hides a dark and twisted secret unknown to his clients.
This short by Michael Wong is just mere minutes in length, similar to a movie trailer. While it is Wong’s first attempt at filming horror, it seems promising.

The intense style and gore elements genuinely come together, accompanied by a jovial tune setting an entirely different vibe yet meshing with the hidden secrets behind closed doors.

The story behind it seems much like escape room movies that have gained popularity in recent years, and this could very well be a sneak peek at such a film if the director ever wants to push it through.

It certainly seems like a possible path for Michael Wong, besides his other short carrying more romantic and drama-focused directions.

Specifically, the art style is on-point here, and it is worthy of some praise despite the short duration.

Hoping you all watch and enjoy the shorts, sent to me by Michael Wong himself.