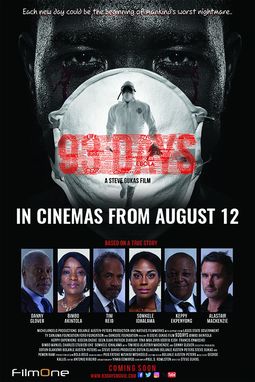 When a Liberian national gets hospitalised in a Nigerian medical centre, doctors identify he's suffering from Ebola. While doing their best to isolate the patient and disease, most clinic personnel are isolated to stem the surge of Ebola.

93 Days is a recreation of the true story about Nigeria's brush with the Zaire strain of Ebola and the First Consultants Medical Centre fight against it. A Nollywood production, 93 days opens a book over the effects in Lagos, Nigeria with the Ebola crisis in 2014. Despite criticism by some of the families of the people portrayed in the film, I see 93 Days as possibly being eye-opening for younger audiences in western society.

As with the majority of "Based on a true story" films, there's bound to be inaccuracies; those inaccuracies are also largely part of the criticism delivered by the families of those who passed away during the movie's real events. Whether the medical side of the story and the symptoms shown are entirely accurate is something I cannot be sure of, yet it does seem accurate with some dramatisation here and there.

Everything surrounding the subject flows well, and honestly better than I would've expected, being my first experience with Nigerian cinema. Danny Glover is introduced as one of the doctors, seemingly in charge of the medical facility and as expected, he delivers. Glover might be the odd one out, an American actor put in purely to appeal to foreign audiences, yet I feel the movie would've done perfectly fine without him as well. Mainly the actresses perform very well, stunned due to the sudden confrontation with this disease plaguing Africa and now in their backyard or rather at their front door. While applauding those efforts, there is a sense of soap opera-type acting when fully utilising the drama.

It's good that a Nigerian filmmaker created a film like this to convey a serious story that people outside of the affected areas won't be as familiar with as they perhaps should be. Yet there is an unpleasant aftertaste, while it might not have been the intention, there were some points in the film that appeared to be propagandistic. Nigeria itself and the First Consultants Medical Centre workers are the focus. The movie shines a light on the near-flawless heroism shown by those in direct contact with the affliction. The doctors' bravery and effort should be at the forefront, I would also fully assent to that, but there could've been more attention to Ebola and its grip on the African nation as a whole. Even the ending credits fail to acknowledge that despite Nigeria's successful handling of the situation, Ebola is still an issue throughout Africa.

If it would've taken a bit more time in highlighting all different aspects of the disease and not come over as I stated, also perhaps being a bit more true to life, in cooperation with the families that lost their loved ones it could've been to show in school classrooms

You could watch it in 93 Days if you really want to.