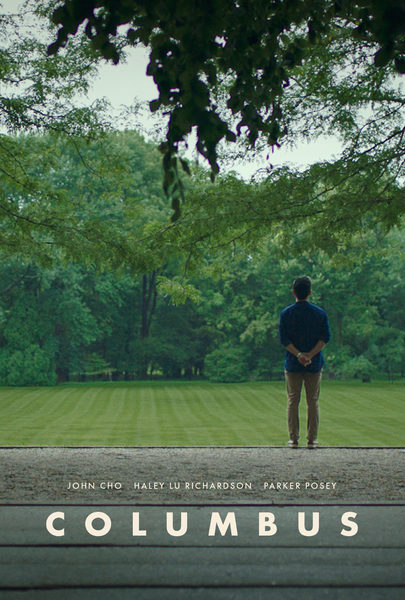 Set in the city of Columbus, Indiana, this is a movie unlike most as it portrays two people from entirely different backgrounds, who come together in a simple and realistic manner. It’s a picture where the focus is not set on an overly compelling story arc or an almost unimaginable action sequence. Nothing like that, instead it’s a unique showing by video essayist Kogonada in his first actual feature film debut.

With Columbus as the background and you could even say one of the main characters in itself. We’re granted an extended viewing into a section of the lives of Casey (Played by Haley Lu Richardson), a young woman who’s lived in Columbus her entire life, and has always been infatuated with architecture, aiding her mother who has struggled with drug addiction her whole life.  And then there’s Jin (Played by John Cho) The middle-aged son of a Korean born architect who was to give a speech about his work before he fell terminally ill. Due to this unfortunate development, his son, Jin had to leave his native Korea and fly to Columbus with work-related stress in tow now combined with caring for his estranged father in what would most likely become his final days. Shortly after being introduced to these characters and who they are, these main characters unexpectedly intertwine. Casey (fearful of insulting the man) asks Jin if he’s perhaps the son of the recently hospitalized architect who was supposed to give a speech in town, one Casey was excited to attend due to her interest in architecture, only delighted to find out he is, in fact, his son.

Soon after this sudden, unexpected meeting, the two find solace in each other’s company despite being so different from one another. Casey has a way of pulling Jin out of his work to show him different buildings around Columbus, showing him the influence of his father’s profession on her. For both characters, however opposites this feels like a respite. Jin being distracted and relieved from his stressful occupation and the obscured grief of his father’s soon to be indubitable demise. And Casey was getting the chance to talk to someone so distant from her, allowing her to open up about her emotional past and allowed an opportunity to think about a possible future away from her home. Throughout the journey in Columbus, there’s always something intriguing to see, hear and look out for, which causes one compelling, coherent piece of art to come together in a realistic showcase.

Few movies could split an audience in this way, where some would delight in the relaxed and calming nature of Columbus perhaps even granted some respite of their own while others might feel like it’s uneventful, like watching paint dry.

Truly a masterful showing from the actors in this film, and honestly one of the most interesting and most promising directors in some time.