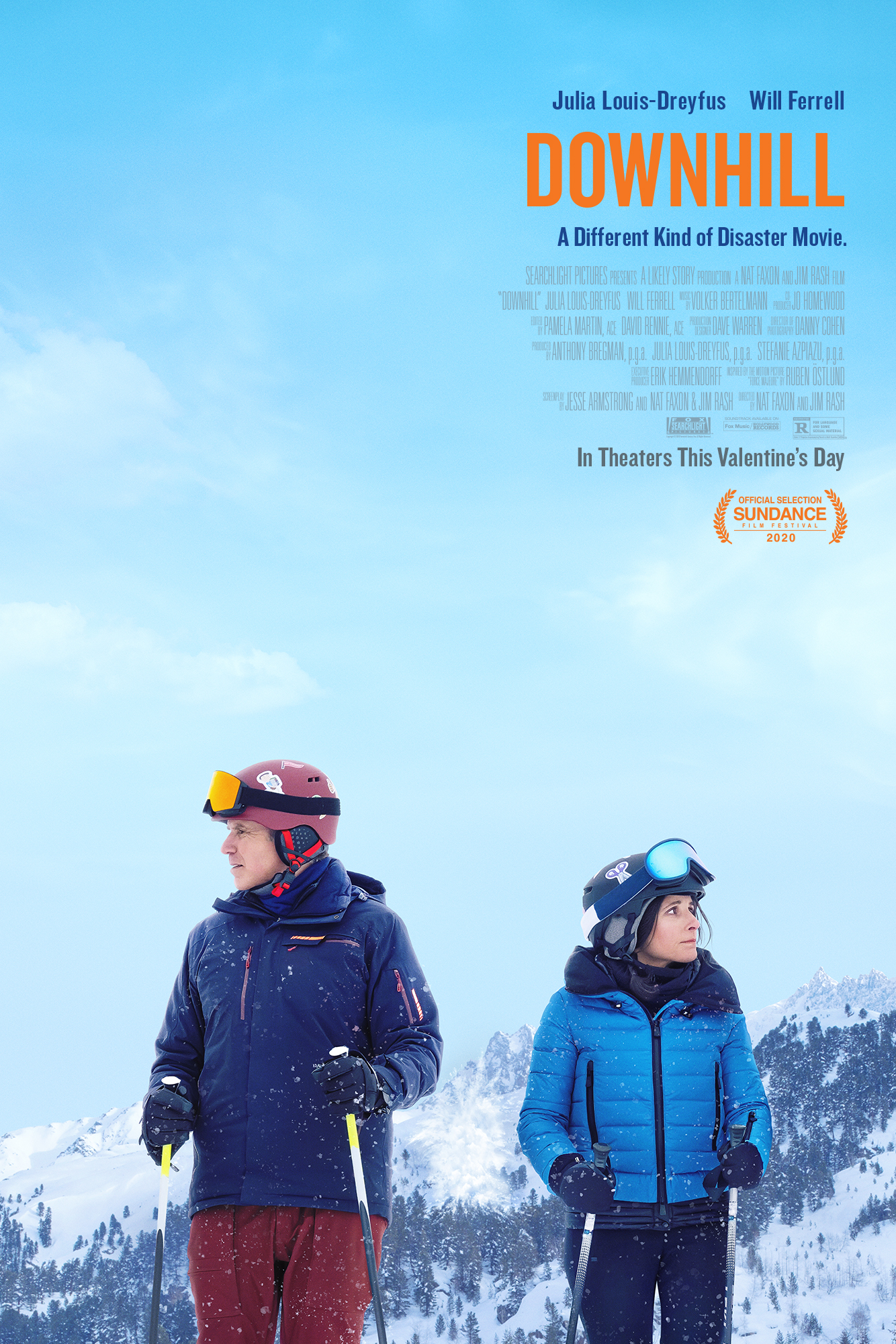 An ideal skying vacation to the Alps puts a married couple in an un-ideal situation which leads them to rethink their lives, family and marriage.

Serving as an American adaptation to the Swedish film Force Majeure (Also known as Turist) Downhill markets itself to an American audience that wouldn’t necessarily go out of their way to watch foreign films. Produced by Julia Louis-Dreyfus and directed by previously paired up directors Nat Faxon and Jim Rash it is supposedly an ode to the 2014 film.

Before starting the writing process of Downhill, I found out that this was not an original script and instead, a remake of a Swedish foreign film, since I felt obliged at that point to watch both movies (Especially due to the almost identical scenes in the trailer) I’ve decided to compare the two films while trying to focus on Downhill as a standalone movie.

As a genre comedy/drama is certainly not easy to pull off, to merge such disparate genres is quite the achievement and to then attain that combination of genres is even more challenging. Casting Will Ferrell as the male lead is an obvious step towards nailing down the comedy elements, usually being heavily typecast. Dreyfus, on the other hand, while being most famous for the sitcom Seinfeld, she definitely has the acting chops to achieve both sides of the movie genre. While focusing on a family, the male and female lead take up most of the screen time with the kids serving as supporting actors throughout. From the opening shot where the family is photographed on the ski slopes followed up by the first run-in with one of the supporting actors (typical for an American movie in Europe it’s a German lady with quite the stereotyped), it’s quite clearly a comedy film, and that’s about it. The comedy stays apparent until the identical and plot opening scene from Force Majeure.

After that point the story shifts, and it does so drastically, aside from the aforementioned ‘’German’’ lady there are just a few truly comedic moments left in the film (Most notably the cameo from Kristofer Hivyu who also starred in Force Majeure) to me the shift was too drastic, it is still a comedy but has a hard time attaining that, Dreyfus’ character interactions with Ferrell fell on deaf ears in several scenes but most notably a scene where the couple of Zach and Rosie (Zach Woods and Zoë Chao) came to visit their room in the hotel after spending the last weeks travelling through Europe.

This is the point where I’d like to draw the comparisons and explain what worked and what didn’t and perhaps which movie is the better pick among the two; this is pure preference per person. Force Majeure is almost identical if we’re looking at the trailer; however it is much slower paced, Downhill plays on a more modern audience and feels a lot snappier, it simply gets to the point quicker, here it loses nuance, a nuance that was very well executed in the original Swedish picture. Where Dreyfus’ character almost immediately starts getting frustrated, this takes a good while in Force Majeure as the main character’s there played by Johannes Kuhnke and Lisa Loven Kongsli more subtly start addressing what happened before the emotional breakdown of their characters. Force Majeure took longer to get to the point, but the nuance was vital to create a gratifying plot. Not only was the dialogue better in a more subtle way, the children and thus the family elements played a much more significant role, as their son is often seen crying, asking his sister if their parents are going to break up, so simple yet effective.

Both films I would describe differently, as Force Majeure seemed to address more of the drama, Downhill took the opposite route and was more comedy-oriented. In the end, what you’d like depends on how far you’re willing to go, easily digestible semi-comedy with some funny moments and a polished, fast pace then go with Downhill. But for a deeper, more emotionally drawing slower-paced experience and in my opinion, the better option, watch the original Swedish picture.

With overwhelming force, this movie goes just where the title says it’s going to.