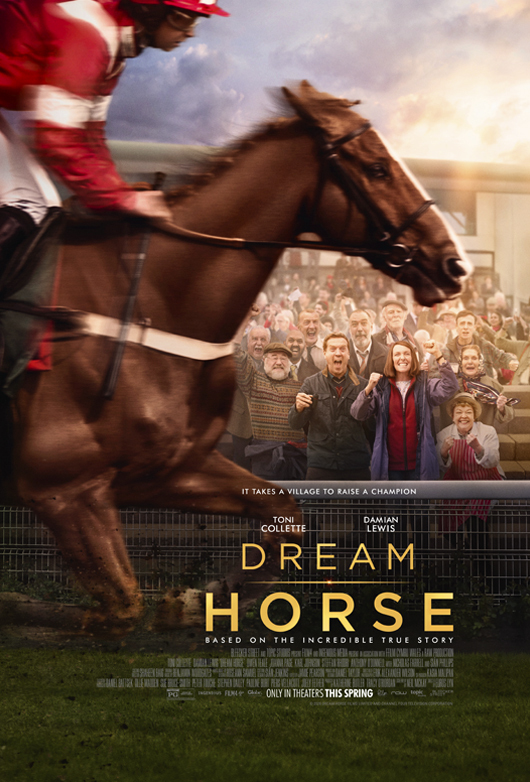 Without any experience in horse racing, Jan Vokes buys an inexpensive and retired thoroughbred mare to breed her with a stallion. Despite having little money, she convinces several neighbours to chip in, forming a horseracing syndicate and using their combined investments training the foal readying it for professional competition.

Directed by the Welsh Euros Lyn and written by Neil McKay, ‘’Dream Horse’’ is the true story of Jan (Toni Collette) and Brian Vokes (Owen Teale), who bred racehorse Dream Alliance. As unlikely competitors in a sport for the rich, they baffle their competition. The film premiered at Sundance in January 2020, then continued to show at several other film festivals until it released online around May this year.

In quite the uncommon sub-genre, ‘’Dream Horse’’ finds itself in, diversifying itself even more, when it combines horseracing with unique comedic tones creating a compelling mixture of drama, humour, and storytelling. It’s a feel-good tale and a true story simultaneously, which perhaps makes it even better. If anything, it is ‘’different’’, featuring a talented cast with some excellent acting. ‘’Dream Horse’’ is just full of heart due to the believable acting and British-style comedy. For those with trouble understanding thick accents, I would have to advise subtitles as you’d have trouble getting any further than Collette and Lewis, who are definitely the easiest to understand. Some gags combined with the unique characters in the syndicate really make this family-tolerant sports film chuckle-worthy. The humorous titbits alongside the drama that bumps up throughout create a wholly satiating journey.

From what I personally managed to look up about the story it’s based on; It seems mostly accurate, although some inclusion of the actual jockey riding Dream might’ve been worth putting in. I can wholeheartedly recommend this faithful depiction of Dream Alliance and its owners for those horse-lovers out there and enthusiasts of equestrianism.

Dream Horse is a definite standout in the horseracing sub-genre.