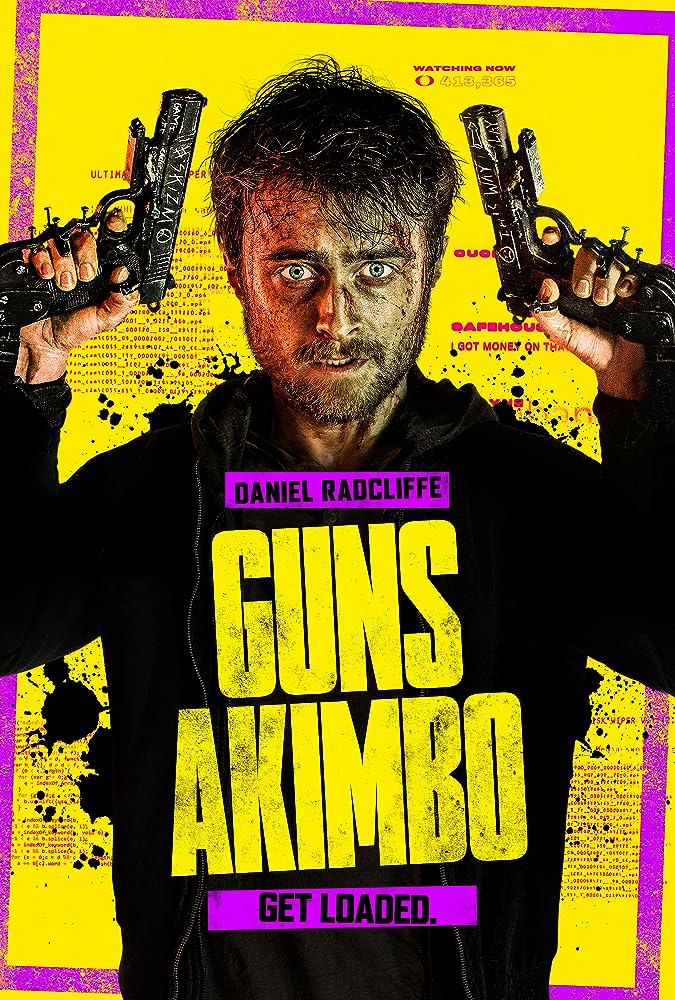 Society has turned into a mosh pit of violence and negativity, and people spend a considerable amount of time on the internet. A program called Skizm has taken advantage of both people’s time online, and the warped way society works in the fictional city where Guns Akimbo takes place.

Meanwhile, Miles (Daniel Radcliffe) is living his normal life working a job he’s miserable in for a boss he despises. One thing leads to another as Miles discovers Skizm, in his frustration of both the situation he finds his life in and the appalling game of Skizm: a show that takes criminals and pits them against each other in deadly competition, who survives wins. He starts trolling their Livestream chat, During Miles’ trolling he gets confronted by someone else using the chat, it heats up to the point that his IP address gets shared in chat, Immediately scared off he closes his laptop but to Miles’ poor luck he soon receives a visit by a particularly nasty group of people lead by criminal boss Riktor (Ned Dennehy), they beat him up and he only wakes up the following morning covered with bruises and worse, with guns bolted onto his hands, Riktor and his gang have forcibly put Miles into the competition, and his first opponent is set to be Nix (Samara Weaving) the current champion of Skizm.

Guns Akimbo is more than likely one of the craziest Action movies you’ll see this year, with Radcliffe being in the forefront of this absurdity, it’s seemingly become one of the things he’s most known for these days after movies like Swiss Army Man, along with the absurd movie prone Radcliffe, Guns Akimbo stars Ned Dennehy which was a surprising sight as someone who isn’t all too familiar with his previous work but recognizing Dennehy from series like Peaky Blinders and Outlander something completely different.

The overall stylization of the film is comparable to movies like Scott Pilgrim vs. The World and Kick-Ass albeit more brutal, and that was something that detached me from the film. Usually, I’m not the kind of person that is scared off by excessive violence or an over the top script, but here I have to admit I felt a disconnect, I wasn’t appalled or scared off how the movie is, but I definitely didn’t connect to it as much as others might be.

For what it was meant to be Guns Akimbo really does a decent job; just an absurd, humorous action-filled, violent flick to turn on in the weekend, grab a beverage put on the matching fluffy slippers if you want and switch your brain off, however personally I noticed there are just too many jagged edges like a mediocre script, plot twists and hooks that we’re quite predictable… The bad parts just stuck out like a sore thumb for me. Now, would I rewatch it? Perhaps but probably not as it is made abundantly clear that they're going for a sequel with this one anyway, so I’ll probably just watch that if I feel like I can be bothered. The ending with that sequel plug it didn’t make sense for where it left off and felt like it was a ‘’happy’’ ending for happy ending’s sake.

Guns Akimbo is like a B-movie in a Triple-A coating.