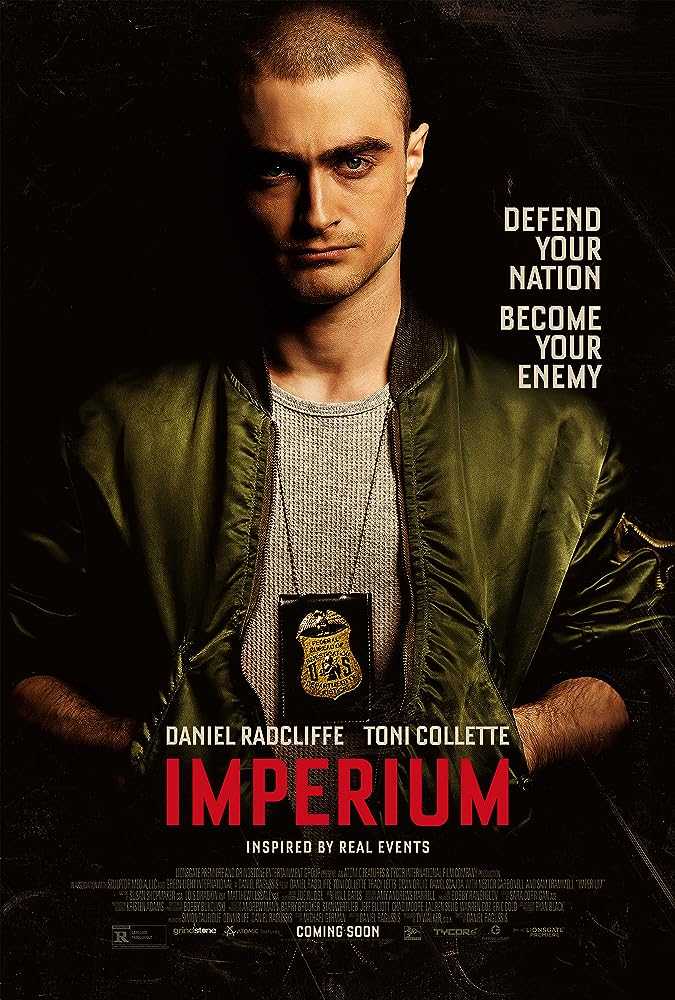 Imperium follows the story of Nate Foster (Daniel Radcliffe), a young FBI Agent who gets recruited by Angela Zamparo (Toni Collette) a higher-up in the FBI. She requests of him to go undercover, following a lead on a stolen radioactive substance often used for bomb-making, presumably currently in the hands of a White Supremacist/Nationalist movement.

To try to fit in Nate shaves his head and tries to get recruited by a group of typical thuggish skinheads whose leader is well connected with a radio-host who broadcasts supremacist propaganda and hints at ‘’A war to come’’. To infiltrate the movement in question easier, Nate is introduced to the skinhead group by an experienced member (also recruited by the FBI, probably for time off some sentence or immunity from a sentence) so that Nate would be able to gain trust more easily. Soon after being introduced the people in the movement start to like Foster more and more as he gets easily introduced to the inner circle and later on too more prominent organizations of the same racist agenda.

This is mainly how the story unfolds as Nate gains more information and intelligence while moving up to higher-ranking groups in the movement and so he positions himself as a likeable guy who supports the ideas of these hateful groups while trying to find the location of the stolen substances. Most of the group transitioning and making-friends seems to go pretty fast. Still, it’s good to take mind that Nate has experience and training in people skills so this would go smoother for him than it would to others, plus he was introduced by a well-known member and tries to help these factions in any way he can and doing well at it. Also, I think it’s most pleasurable if you watch the movie imagining some time went by in-between some of the scenes; otherwise, it does seem to move-along a bit too rapidly.

My main criticism would be with some of the characters as they’re quite cliché. As mentioned above, I’d say you’d have to imagine some un-shown moments between scenes as there are also there are a few minor plot-holes; most of it was pretty well explained, but there’s still some lack in clarity. Some things weren’t as believable, but honestly, these moments work even if it’s just used in a way to create some tension in a movie that could’ve otherwise gotten boring very quickly. Daniel Radcliffe’s American accent was very good, while not one of the first films he has to use it in it does stand out remembering his roles as Harry Potter. The character building was one of the best I’ve seen in a short while, as most roles in the film get introduced in a great fashion very much using the group narrative of Foster. It makes the viewer emphasize with these hateful groups in a way creating certain bonds with them no matter their harmful intents. Eventually, you won’t necessarily be rooting for certain characters, but you do understand them in a way. All of the aforementioned works well with Radcliffe’s character’s feelings and creates a comfortable bond between him and the viewer.

Overall the flow of the movie combined with generally enjoyable acting creates an interesting and pretty unique setting and film in and of itself.

Interesting and well-staged view into a controversial subject.