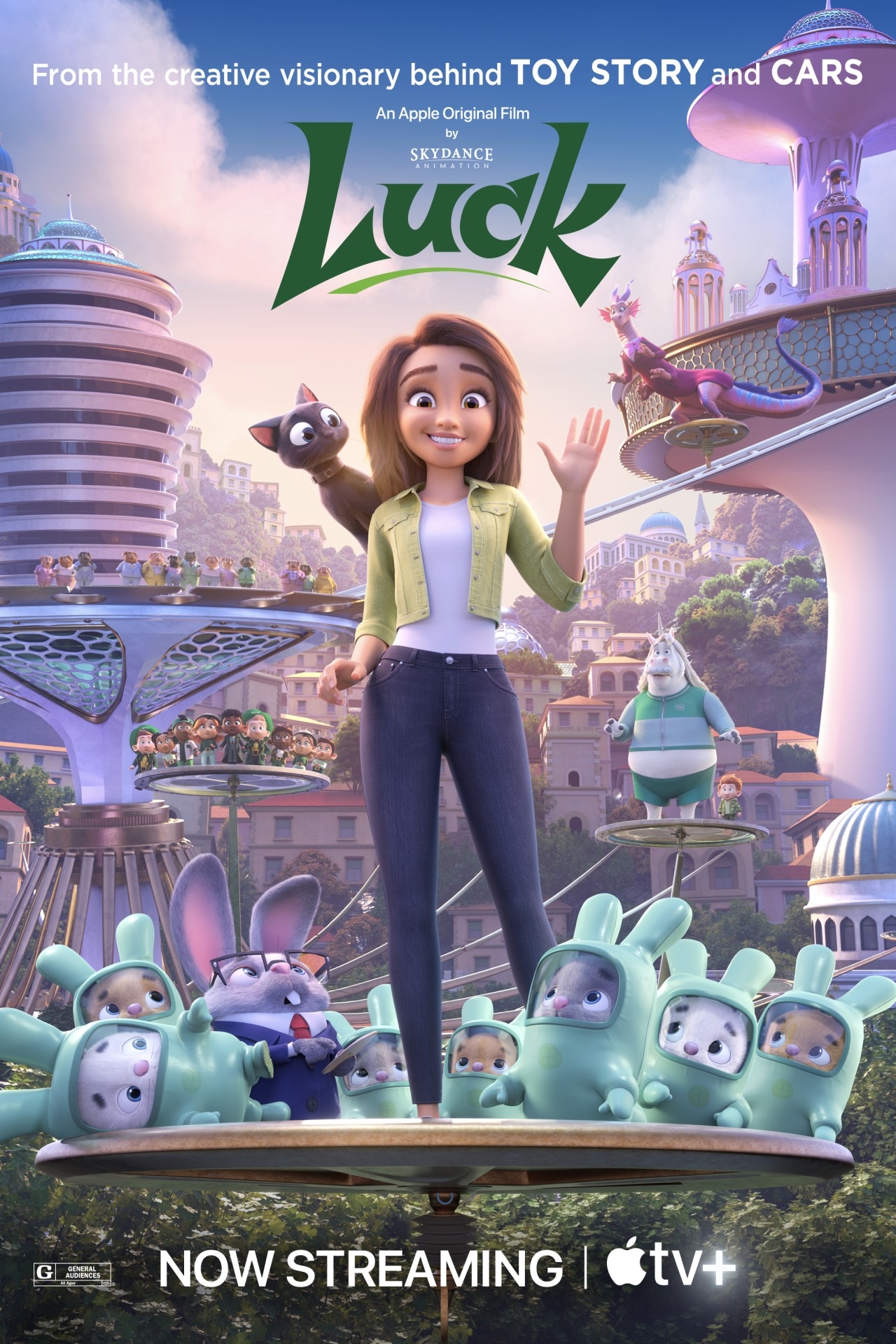 When an incredibly unlucky young woman stumbles upon a lucky coin, her fortune shifts until she loses it. As she does, she discovers the Land of Luck which has been secretly affecting people's luckiness for time immemorial.

Becoming only the second-ever Animated Feature Film by Apple TV+; "Luck" lands itself in a unique position, the first being the late 2020's movie "Wolfwalkers". "Luck" features many talented voice actors, including Simon Pegg and Whoopi Goldberg, among others. Set to release under a partnership between Paramount and Skydance, that partnership dissolved in 2019, thus publishing the film through Skydance Animation and Apple Original Films; it has been distributed through Apple and being streamed on Apple+ TV. Having grown up in a foster home, the unlucky Sam Greenfield (Eva Noblezada) is ageing-out and has to make life happen for herself. Her extreme clumsiness and misfortune aren't helping, that is, until she has a chance encounter with a black cat; unbeknownst to her, this cat comes from the Land of Luck. And it is his lucky coin which she finds and subsequently loses. Meeting the cat for the second time, she discovers he can talk as he accidentally blurts out his grievances upon Sam, telling him she lost his lucky penny. Leading to a chase as the cat flees, and Sam following him into a portal to the Land of Luck.

While certainly not unique in terms of its premise, being a fantastical realm hidden from humankind which we've seen in films such as "Monsters Inc.", "Soul" and in certain aspects, even "Charlie and the Chocolate Factory". In "Luck", this mysterious hidden realm is called The Land of Luck and being called such, it is indeed in charge of everyone's fortune and misfortune, balancing the scales of power so we humans can live our everyday lives. 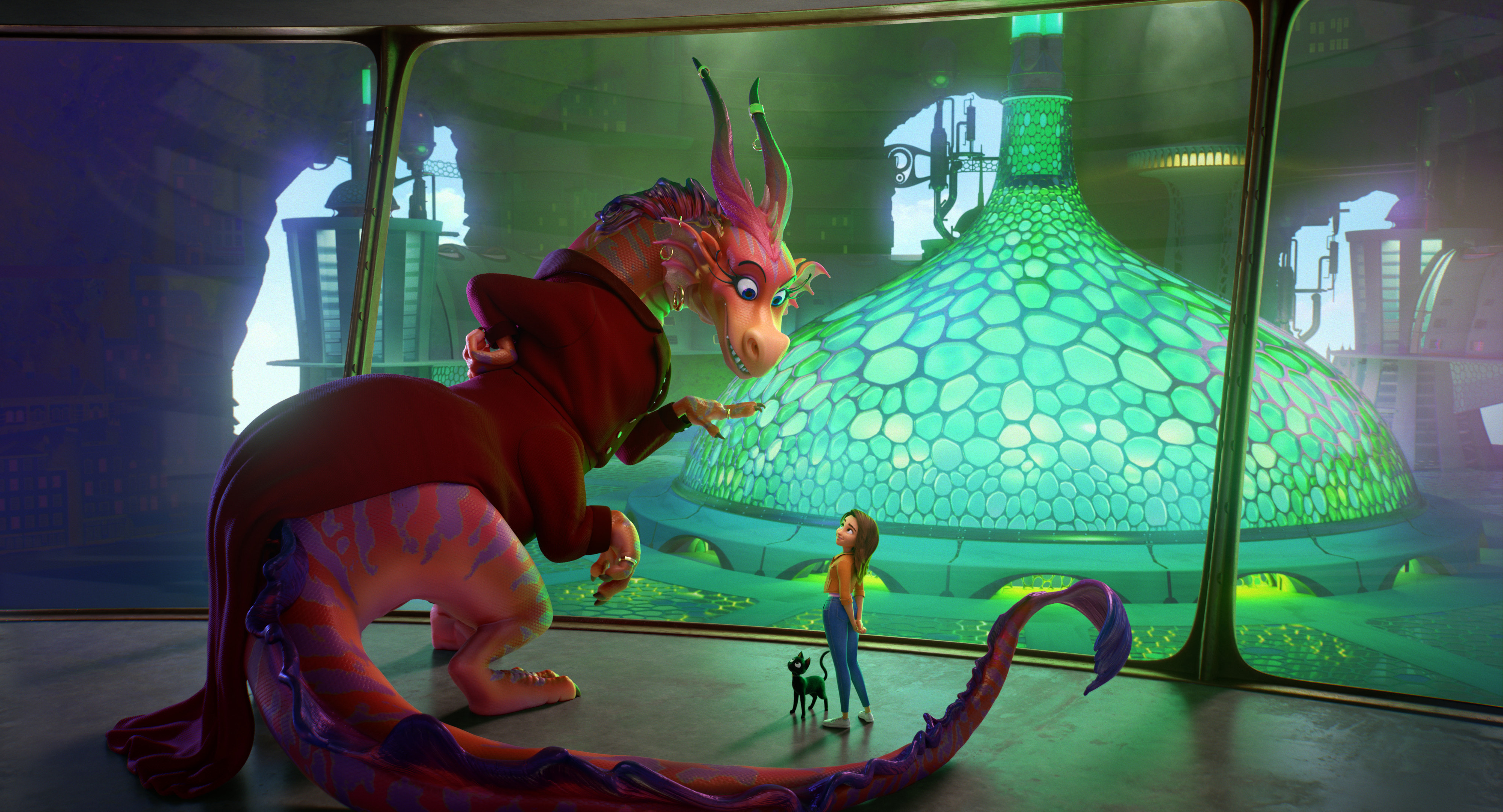 Feeling mainly marketed towards children, "Luck" seems to harken back to older animation films; while certain life lessons are hidden within, it is more of a fantasy adventure. To compare to more modern Disney and Pixar projects wouldn't be fair as it's difficult to break through with an animation film outside of Walt Disney's studios. Still, they hired former Walt Disney and Pixar CCO John Lasseter, who might've given them a slight edge. It serves its purpose, not looking as advanced as other modern animated movies, but still good. An additional boon is the inclusion of voice actors like Simon Pegg, Jane Fonda and some others delivering performances only they could've. Yet, still, as a whole, "Luck" appears too generic of an adventure movie; as Noblezada's Sam enters the mystical realm of the Land of Luck, some of the quirkiness delivered in the real world section dissipates, and it shows an underdelivering narrative with cutesy and quirky characters nevertheless, Pegg's Bob, the cat carries Sam through the Land of Luck as a guide excellently, being assisted by his (not) friend in O'Donoghue Gerry. But there's this horrid melancholic yet hopeful-sounding soundtrack which pops up far too often. Within the self-made constraints, there are too many decisions that degrade the overall quality of the film.

As with any animated film, despite some chuckle-worthy sections and endearing life lessons at the end, it doesn't stand out enough to still be a viable contender in today's animated film industry.