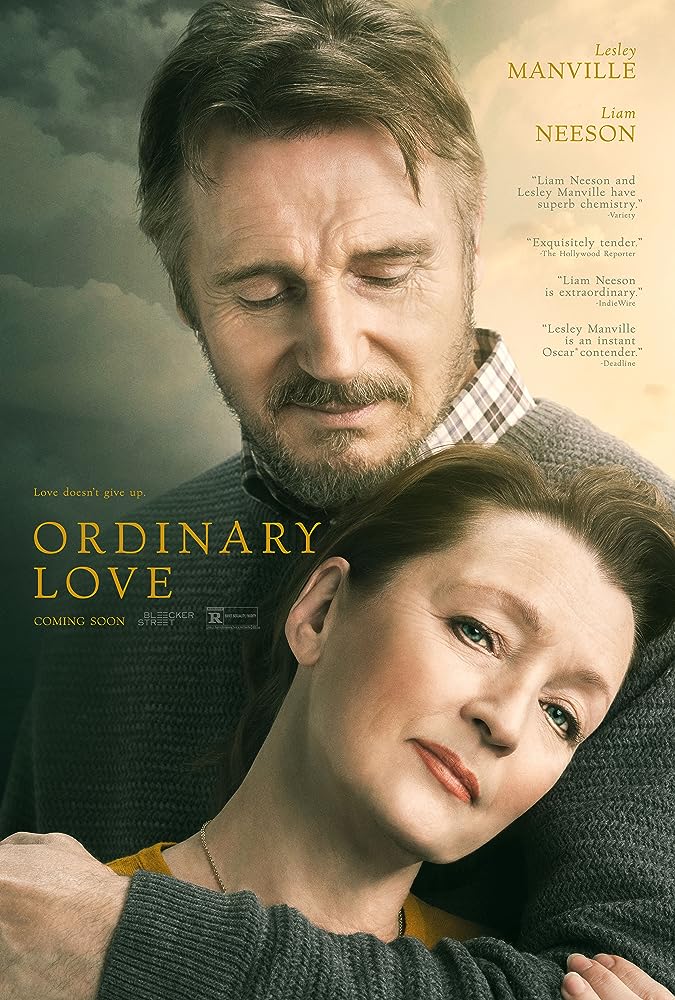 Tom (Liam Neeson) and Joan (Lesley Manville) are a middle-aged couple living quite traditional lives, going for a walk in the mornings and enjoying a glass of beer or wine in the evenings, sometimes they argue. Still, in the end they always come back together. Their Ordinary love is interrupted when Joan discovers a lump in her breast; this leads her to breast cancer treatment, the story takes a turn for the dramatic a journey of struggle and discovery of choices to make.

Such a relatable story, of which essentially is quite a simple film deepens it with the emotional and social constructs, whether you’re a lover of Romance movies or more orientated towards Drama, Thriller or completely different genre’s still Ordinary Love feels like it’s easy to get in to for any mature target audience.

With inherently a plot that serves to well-structured pacing, it’s so easy to get into and even easier to keep watching, there isn’t much character building necessary to believe that these characters have been married for an extensive amount of time, every interaction they have feels natural and organic not surprising with well-experienced actors like Neeson and Manville. It’s the organic feeling of a relationship the actors carry over so well that makes the plot with its ups and downs carry over so well, the balance of the hard times and arguments followed by moments of tenderness and unconditional love, and combined with all these moments are the beats of humour between the married couple.

As time progresses, small cracks appear in the characters, the struggle and the social questions they have to figure out takes a toll even on the loving couple that is Joan and Tom. Yet, still, the balance is almost perfect between the ups and downs even when the negatives start overtaking the positives.

Storytelling never felt slow, and I was constantly engaged in the characters and sympathising with both them and the roles of David Wilmot and Amit Shah that get introduced later on.

Of few things I would’ve liked to see was an encompassing music score, as it is one of the most lacklustre parts, an emotional film like this could’ve been immeasurably bolstered with musical backdrops, of softly sang lyrics or even some classical excellencies.

Heartfelt emotion and simple yet truly engaging performances make this feel like so much more than an ordinary film.