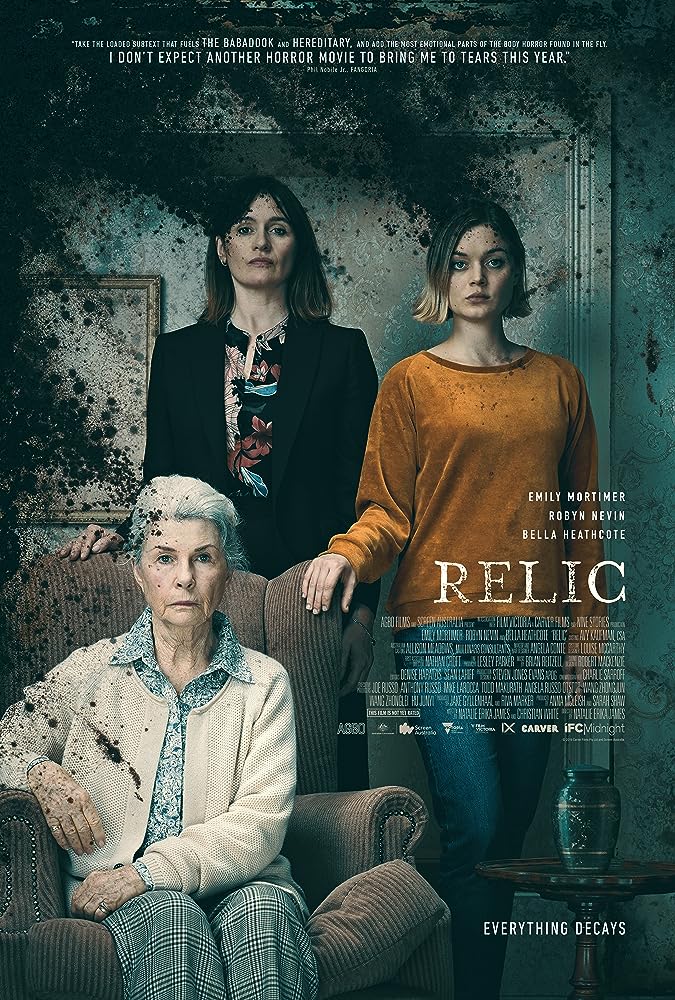 After the mysterious disappearance of Kay's grandmother Edna, she and her daughter Sam temporarily move into Edna’s house to start a search effort. Soon Kay and her daughter realise not everything is as it seems and they start noticing strange marks and mould in various area's old home.

Starting relatively straightforward, Relic seems to be nothing all too special as far as Horror films go. It takes place in an old house in slight disrepair; it's off the beaten path, which makes it easy for the viewer to start off feeling tense and uneasy. While the feelings you inherently get hit the right mark both the acting and plot do a good, if not great job at emboldening the uneasiness.

However; Relic certainly takes things slow, so don't expect things to kick off fast. It's quite a while after the curious start before things turn from uneasy to possibly scary. The pacing might not be for everyone, but I felt it was an enjoyable slow-burn not failing with the often-made mistake to simply pile on the jump scares but instead focusing on an eerie vibe and atmosphere.

As aforementioned, I believe the acting was almost impeccable and worked excellently with the atmosphere the director is trying to convey. Relic handles its plot with only a handful of actor's and some only making an appearance or two throughout this small cast creates a lot of room for extra depth and development in the characters. However, the latter does not happen much. Rarely does the film take moment's to dive into the character's motivations and psyche truly it's fine but a bit shallow in that aspect. Still; Kay (Emily Mortimer) portrays the regret she feels as she tries to deal with her mother's situation very well, terrific effort.

The most notable aspect you'll see during watching Relic is the focus on a deeper meaning. The onset of dementia is clearly insinuated, from early on, there are many hints to the underlying story, and towards the end where horror takes the wheel, it's most transparent. The choice to present an illness so many elderly struggle with in such a way, honestly I thought it was an interesting take and gripping enough to keep you watching but overall it was a bit on the nose and hard to miss.

It might not be the best in the genre or the Australian film industry but the unique ideas along with some other highlights such as a later scene where daughter Sam (Bella Heathcote) is stuck in a forgotten corridor in the house highly reminiscent of the Winchester House; things like such make it at least enjoyable to much even though it isn't much to remember or recommend.

Relics can be cherished and looked after or soon to be forgotten in some dusty corner. Sadly even with the unique approach, this film is not one to be remembered.