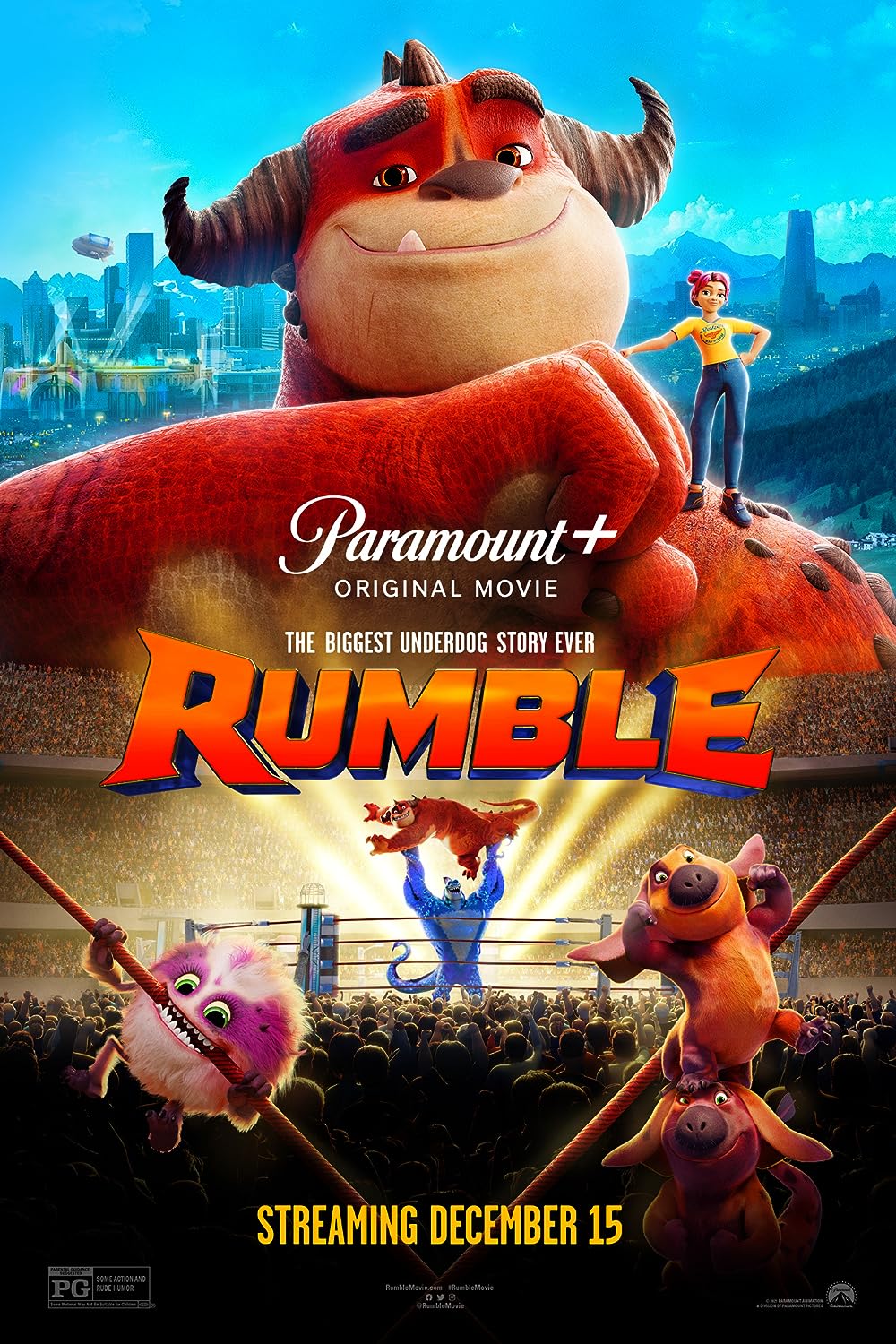 Writer: Matt Lieberman, Rob Harrell (Based on Graphic Novel by)

In a world where giant monsters go head-to-head in spectacular wrestling matches, Winnie tries to attain the greatness her father once had before, mysteriously disappearing in an accident at sea. To do such a thing, she searches for a rising monster wrestler and stumbles upon Steve, who turns out to be the child of the legendary Rayburn who went missing all those years ago.

With plenty of experience in doing animation and working on such projects as ‘’Shrek’’, ‘’Monsters vs Aliens’’ and ‘’Shark Tale’’. Hamish Grieve makes his directorial debut with this Paramount+ release. The story itself is based on and adapted from Rob Harrell’s novel ‘’Monster on the Hill’’ and producing the picture are Paramount Animation, Walden Media, Reel FX Animation Studios and WWE Studios, with distribution, of course, handled by streaming platform Paramount+. 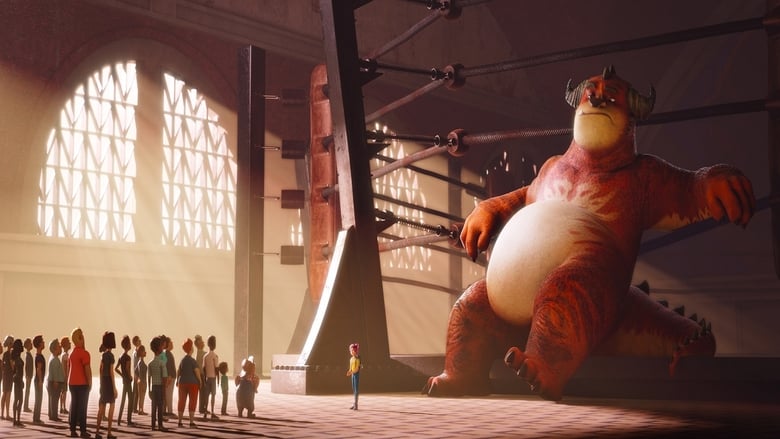 Conceptually feeling similar to Shawn Levy’s ‘’Real Steel’’, ‘’Rumble’’ is the newest in the line of WWE Studios films, which is a subsidiary company to World Wrestling Entertainment, showing top-class professional wrestling internationally. While the record of the studio is far from stellar, just a few years ago, they did release ‘’Fighting with my Family’’ focusing on the real story of wrestler Saraya-Jade Bevis better known as Paige, which was actually an enjoyable film, playing more to the strength of WWE itself. So now, in collaboration with a few studios, most importantly Paramount and Reel FX, they try their hand at something different, an animation film still featuring wrestling in some way, which doesn’t seem like the best option, yet at least WWE presence feels accommodated. 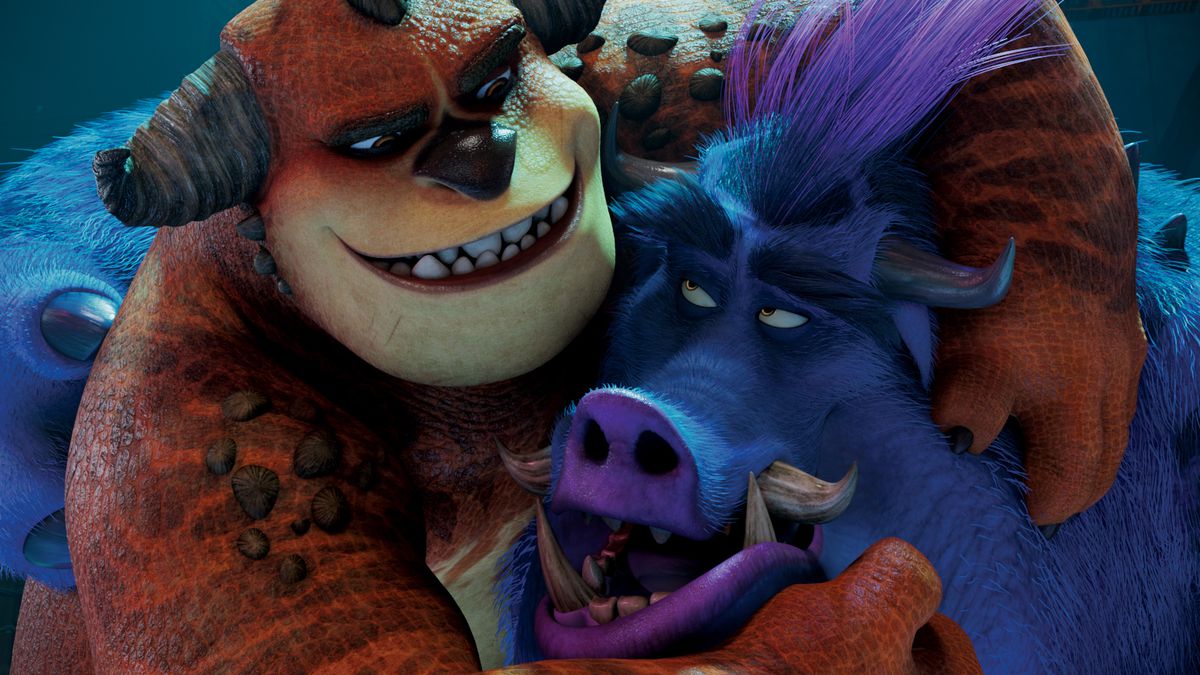 On its own, it did seem appealing to me, not knowing too much about it. Still, it would be challenging to outmanoeuvre Disney/Pixar companies that leave little room for outsider animation studios to attain much success. Some have received success, such as the ‘’Shrek’’ franchise, ‘’How to Train your Dragon’’, and the slate of Studio Ghibli films. The combination of wrestling, Kaiju’s and Pixar, which ‘’Rumble’’ creates, is pleasant, yet it stays superficial and straightforward. Being used to so much more within animation for both kids and parents alike, there doesn’t seem to be a place for ‘’Rumble’’ left in this world. It’s certainly not the worst and better than most films published by WWE studios.

There’s some redemption in the creativity inspired by Harrell’s novel, and the pro-wrestling slathering on top will be amusing to fans of the business. And it even features some actual pro-wrestlers, as is the standard with the studio behind it. In this case, Rebecca Quinn and Joe Anoa’I better known under their personas Becky Lynch and Roman Reigns in the WWE. The moments of pro-wrestling jargon are appreciated and are rare instances that seem to be inserted for an older generation. Yet, even within the pro-wrestling inspired subject-matter, some faults devalue featuring it in the way it does, quirky or not. While it's nit-picking, and it won’t impact the rating I’d give, it is surprising that with a wrestling company producing some moves are given the wrong names.

It is entirely fair to create a more superficial animated film. Still, the fast-paced and undemanding narrative combined with a visual style that felt aged despite being released this year ended up forming an overly bland underdogs tale with a severe lack of character depth and substance which comes at the cost of viewer interest.