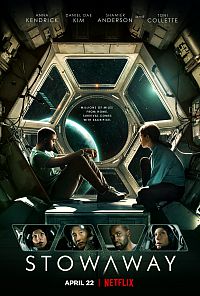 Traveling on a two-year mission to Mars, Crew Commander Marina Barnett (Toni Collette) uncovers a stowaway that had been unconsciously concealed within the ceiling panels. As the involuntary space traveler drops from his hiding place, the CO2 scrubbing device is damaged, and the crew scurries to solve their unforeseen challenge.

Made by Ex-Youtuber Joe Penna, aka MysteryGuitarMan; ‘’Stowaway’’ is a sci-fi drama presenting a depiction of modern space travel in an emotionally driven storyline. Director Joe Penna tried to achieve a realistic portrayal with the help and expertise of several people; among those was fellow Youtuber and astrophysicist Scott Manley.

Kicking off with a launching sequence to familiarise the viewer with the crew, you’ll get a realistic portrayal of a rocket launch. When entering orbit, the focus is on Zoe Levenson (Anna Kendrick) as it’s her first launch, and she’s in awe of the new experiences, while in the backdrop, we see David Kim (Daniel Dae Kim) struggle with the sudden shift of surroundings. Most character interaction from this point is limited, awaiting the boarding of the MTS-42, which will take them the rest of the journey to Mars. After docking, there’s a great way of uncovering the location we’ll get to see for most of the film, as it feels like a short trip as the camera goes along with the crew members turning on the lights in the different modules. The immense sense of detail in aesthetics and character interaction is not often seen. While the actors themselves are brilliant, the writing and directing certainly helped create a natural feeling interaction between cast members and even more so as tensions rise.

Once the plot gradually turns to the discovery of the hidden stowaway to push the narrative further, the interactions between everyone slowly shift away from the initially hospitable communication. From this point, the wonder and discovery turn into a grim tale of survival with a balance between the brightest light and the deepest darkness. The severity of the situation becomes clear and complex choices need to be made, some not as straightforward as others.

From the very start, just the astronauts on the MTS-42 are followed, and we never really see their colleagues on Earth from employer (Hyperion). Due to this fact, there’s a closer connection with the crew and their fourth involuntary member. Even the viewer gets a sense of isolation thrust upon them while filling in their thoughts about employer Hyperion.

One of the few criticisms I would have about ‘’Stowaway’’ is that it could’ve lasted longer, but that’s simply because I hoped it would before the credits rolled to no fault of the creators of this award-worthy film.

Stowaway is a realistic and effectively emotional space drama that needs some more eyes on it.